From the National Guard to the Hall of Fame: A Story of Progress 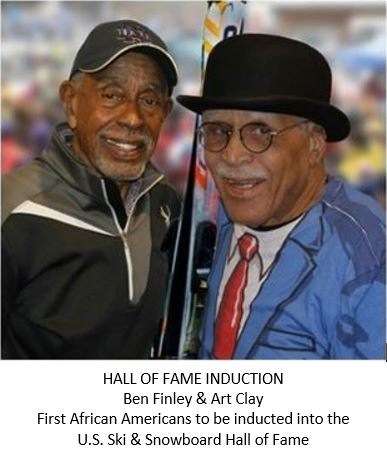 If you are lucky, you might get a standing ovation at the end of your speech. It is not often that you make your way to a stage through a standing, cheering crowd, but that is exactly what happened to Ben Finley and Art Clay during their induction into the U.S. Ski & Snowboard Hall of Fame in March 2022. This enthusiastic welcome was a far cry from the perilous welcome they received almost 50 years earlier.

In 1973, at the tail end of that time’s Black Power movement, more than 350 Black skiers from across the country came together in Aspen, Colorado, to hit the slopes.  With full awareness that the ski community would view 350 Black skiers as an unusual, unsettling, and unwelcome sight, Ben Finley (my uncle and President of 4 Seasons West Ski Club) issued a press release to local papers that Black skiers were coming. That press release caused so much concern and anxiety in the community that the state’s governor placed the Colorado National Guard on high alert. They simply did not trust or know what to expect from all those Black people gathered together in one place at the same time to……ski!?!?

The National Brotherhood of Skiers (NBS) was established the following year.  For almost four decades, the NBS has introduced tens of thousands of Black men and women to the sport and nurtured them through their skiing journey. Each year, the organization hosts the NBS Black Summit, the largest gathering of skiers and snowboarders in the country. The event supports the NBS Olympic Scholarship Fund and its mission to identify, develop, and support athletes of color to represent the United States in Olympic and international winter sports competitions. The NBS has almost single-handedly changed the perceptions about who belongs on the slopes.

In March 2022, almost 50 years after the National Guard was put on high alert, Ben Finley and Art Clay, the two men who founded the National Brotherhood of Skiers, became the first Black people to be inducted into the U.S. Ski & Snowboard Hall of Fame.

The fight for social justice is a long, arduous, ongoing journey. It is exhausting. It can cause disillusionment, anger, and resentment. It can feel unending and unwinnable. There are times we want to put the weight down and give up and give in. Don’t! As we continue fighting for change, access, equity, and justice, let us pause to reflect on our journey and some wins along the way.

Let progress motivate us in the ongoing fight. Change can happen. Change has happened. Change is happening. Change must continue to happen. Let Ben Finley, Art Clay, and the NBS serve as a beacon of hope as you continue to fight for social justice. We are not yet where we need to be, but we are not where we once were.