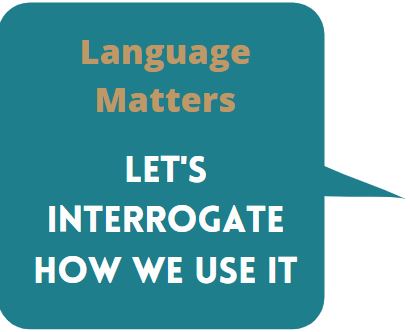 For several months, a commercial running on national television about tipping in the restaurant industry uses the phrase “it’s literally a slave wage”. Every time I hear this phrase on TV, the hair on the back of my neck raises, and I think (and probably make a grumbly mutter out loud) “language matters.”

The words we use not only communicate what we are thinking, but they also shape the very way we think.

The word slave carries with it an implied meaning of “being.” It implies that the very nature of the person is a slave; that a person, by their sheer being and existence, is that of a slave.

What images come to mind when you say or hear the word slave? What is the feeling in your body?

Enslaved is a condition that was imposed on another person. Enslaved is not a “being” but rather a man-made imposed condition thrust upon a group of people. The word enslaved conveys that something is being done to a person—not who a person is.

What images come to mind when you say or hear the word enslaved? What is the feeling in your body?

Being a slave vs. having been enslaved. It shapes and frames your thinking.

Enslaved people did not receive a wage. The phrase “slave wage” suggests that enslaved people earned a wage, even if low. It brings to mind the notion of choice, decision, poverty, and hard labor for low pay. That was not the case.

Tipping is therefore not “literally a slave wage.”  Tipping came about as a result of the restaurant lobby demanding the right to hire newly freed slaves (mostly black women), not pay them anything, and have them live entirely on what customers chose to give them as a tip. As such, tipping is a remnant of Emancipation – a legacy of slavery institutionalized in the New Deal-era Fair Labor and Standards Act of 1938. The fact that people working in an industry must still rely on tipping to earn a wage is as unconscionable today as its origins, but it is not “literally a slave wage” because enslaved people did not earn a wage.

I know that the objective of commercials is to capture attention and entice people to action. In this case, the streaming channel CBSN is enticing people to watch a show. I watched the show; it is very informative and one that I even recommend you watch. Having said that, we are responsible for the language we use and the messages our language sends. The phrase “slave wage” perpetuates the notion that slavery was a choice and not an imposed condition. It perpetuates slavery as one’s being and one’s choice (and that a result of that choice was a low wage.) Equating enslavement to poverty diminishes and minimizes the experience of being enslaved. I realize that was not the intent of the commercial, yet it is the impact.

Consider the language you use. How does it shape your thinking? Your perception? How does it reflect your beliefs (conscious or unconscious)?  When you announce that you, “need some young energy in this office,” what does that dictate about your beliefs on age in the workplace?  What message does it send to you? What message does it send to others? Is that the message you intend to put out in the world?

As a society, we did not replace the word chairman with chair or eliminate the phrase “illegal alien” to be politically correct or liberal. We eliminated the phrase because a person cannot be “illegal,” a person is not an “alien,” and anyone can be a chairperson. It was done to change and broaden the way we perceive the world and the people in it. Language shapes the way we understand the world. We are each responsible for our language—how it shapes our own thinking and what we communicate to the world.

Let us each regularly interrogate our use of language. What is the impact of your language? Are there words or phrases that you use which require some interrogation?